Preventing Burst and Frozen Water Pipes (And How to Fix Them) 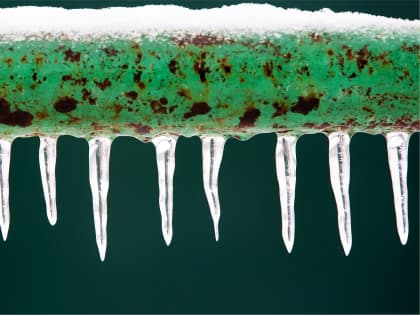 December, January, and February are the most common months for frozen pipes throughout the country. If outdoor temperatures are below freezing, there’s a quick drop in temperature, your home has poor insulation, or your thermostat is set too low, you are susceptible to a frozen pipe.

The next unexpected cold spell or deep freeze could bring homeowners a host of plumbing problems, like frozen water pipes or pipe bursts. Any located along a poorly insulated exterior wall, under sinks, and in unheated crawlspaces are especially vulnerable to become freezing pipes. How can you know when your pipes are freezing? Can you prevent a burst? How can you protect your plumbing? Luckily, there are some things you can do to get your home ready for a freeze and prevent frozen pipes.

How Can I Identify Frozen Pipes?

If there’s no water coming out of your faucet, your toilet won’t refill after flushing, or a water line is coated in frost — then a pipe is probably freezing somewhere in your home. To narrow down the location of the freezing pipe, you’ll need to turn off the main water supply and turn on all the faucets in the house. See which ones are not working. If no faucets work, it's likely somewhere close to where the main service line enters the house. If all the faucets in an area of the house don't work, it’s likely between the split from the main water line. If you are unable to locate the frozen area or the frozen area is not accessible, call a licensed plumber near you.

Will Pipes Freeze At 32 Degrees?

How Do I Prevent Pipes from Freezing?

Frozen pipes are no joke. To protect your home from this kind of winter headache, use these tips to prevent pipes from freezing:

How Do I Thaw a Frozen Pipe?

Make sure to thaw the pipe as soon as you can to prevent it from bursting and causing extensive damage to your property. Open the affected faucet all the way and when the water begins flowing, close all the other faucets to a trickle. There are a few ways to thaw freezing or frozen pipes, but the safest is probably just wrapping the troubled area in thermostatically controlled heat tape. Do not close the affected faucet until you’ve completely thawed the pipe and water flows freely.

If the pipe is located indoors, and there isn't any standing water nearby, you can apply heat around the pipe. Do this by turning on a space heater and pointing it at the exposed area to thaw a frozen pipe. A hair dryer or hot water can also do the trick. Try to avoid using an open flame if at all possible. If you cannot thaw the pipe, call for plumbing repair service right away.

Reasons to Insulate Your Pipes

According to insurance carrier esurance, water damage claims are the second most frequently filed in the U.S., averaging $10,000 for residential properties. Arguably, one of the simplest types of water losses to prevent is leaks caused by pipes from freezing. Before temperatures plunge, you might want to consider these reasons to insulate your pipes now and avoid a future frozen pipe dilemma.

Since 1975, ARS/Rescue Rooter has been a leader in residential and commercial plumbing services. In addition to heating and air conditioning service, we help customers with all sorts of plumbing issues, including frozen water pipes.

If you need your frozen pipes repaired or believe a pipe has burst at your home, find your nearest ARS/Rescue Rooter location and schedule service with our trained plumbers. We’re available for emergency plumbing service near you 7 days a week too!

This was originally published in January 2018, but updated in September 2021.

No Hot Water? Common Causes & Tips to Fix Yourself
How to Save Water: Water Conservation Tips for Your Home
What Does A Gas Leak Smell Like In The Home?
How to Deep Clean a Garbage Disposal Yourself