ARS of Colorado Donates to Veteran in Need 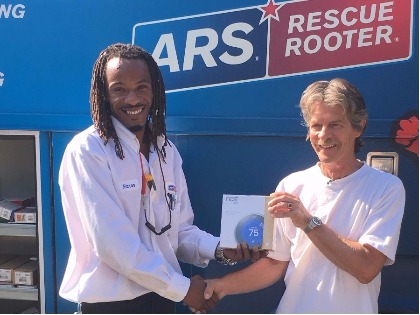 ARS/Rescue Rooter Colorado gave back to a local Colorado man who needed a new HVAC unit. The recipient, Kenton Schneider, was identified by the Volunteers of America and the Colorado Department of Labor for the giveaway. The branch completed the installation, complete with a Nest Learning Thermostat, on August 29th.

Kenton spent over 25 years as a brick-mason and built several landmark buildings in Denver.  Additionally, he represented Denver as a Golden Gloves boxer for the Army. After hanging up his gloves, Kenton took his talents as a blues-inspired guitar player and played alongside major acts at venues like Five Points and Red Rocks. He is the quintessential Renaissance man of the Denver area. His home in Aurora, CO, was reaching unseasonably warm temperatures; however, hard times made affording a new HVAC unit out of reach. ARS was pleased to assist him in making his home more comfortable.

Tony Medina of the Department of Labor describes Kenton as “solid, law bidding and optimistic.” Kenton initially refused the donation, which is characteristic of his selfless personality. Now, Kenton can enjoy the energy efficient features that the Nest Learning Thermostat and a new HVAC will provide him.

"It is a privilege to be able to serve those who have selflessly served our community," says Scott Johnson, Service Manager of ARS/Rescue Rooter Colorado. ARS/Rescue Rooter has been working in targeted markets alongside specific non-profit agencies to complete these projects.